Kuwait City, Tuesday October 18, 2016 – The 2015 Kuwait-sponsored Al-Sumait Health Prize for African Development has been awarded to Britain’s Professor Kevin Marsh of the University of Oxford and African Academy of Sciences, Kenya, for his sustained efforts to control and eradicate malaria, which impacts the health of tens of millions of African children.

The choice was announced at a meeting Monday in Kuwait City of Al-Sumait’s Board of Trustees, which comprises Bill Gates, co-chair of the Bill & Melinda Gates Foundation, and Kuwait’s First Deputy Prime Minister and Minister of Foreign Affairs, H.E. Sheikh Sabah Khaled Al-Hamad Al-Sabah.

Professor Marsh said: “I am tremendously honoured and excited to have been awarded the Al-Sumait 2015 Health Prize, which I see as recognition of the work of many wonderful colleagues who I have been fortunate to work with over the last thirty-five years. The award will be used to continue to support the development of science in the continent, particularly through supporting emerging young African research leaders.”

Dr. Adnan Shihab-Eldin, Director General of the Kuwait Foundation for the Advancement of Sciences (KFAS), which administers the awards, said: “Professor Marsh has spent over half his life living and working in Africa where he’s had a major impact on malaria and other infectious diseases through his ground-breaking work that has helped the health of millions of children.”

Noting that declining rates of malaria have spared the lives of an estimated 6 million children in Africa in the last 15 years, Dr. Adnan Shihab-Eldin said Professor Marsh has played a key role over the past decade in widening the focus on better control and eventual eradication of the malaria.

Professor Marsh will receive the prestigious one-million dollar prize for African development – sponsored by the Kuwait government – during an award ceremony at the Fourth Arab African Summit in Equatorial Guinea on November 22, 2016. The citation from the Board of Trustees noted that Professor Marsh has published over 450 medical articles with African colleagues in peer reviewed journals and built training and research centers in Africa that have educated numerous medical scientists, including many now holding leadership positions in Africa and globally.

The citation continued: “Professor Marsh has gained the trust and respect of his African colleague with his work in the African Academy of Sciences to promote health sciences among scientists. His leadership in the development of AESA, a new pan African platform for supporting excellence in science, is having a continent wide effect in building the scientific and technological base on which Africa’s development depends.”

Al-Sumait Prizes, which honor individuals or institutions who help advance economic and social development, human resources development and infrastructure in Africa, were instigated on the initiative of His Highness Sheikh Sabah Al-Ahmad Al-Jaber Al-Sabah, the Amir of the State of Kuwait.

The awards acknowledge the work of the late Dr. Abdulrahman Al-Sumait, a Kuwaiti doctor who dedicated his life to addressing the health challenges confronting Africa and established the Direct Aid humanitarian organization. Al-Sumait awards are administered by the Kuwait Foundation for the Advancement of Sciences (KFAS) and a Board of Trustees who oversee the selection of the recipients.

Oxford Professor Kevin Marsh has donated his entire one million dollar prize winnings from the Al-Sumait Prize for African Development to the furthering of Science and Research development in Africa. The Professor was awarded the prize for his work in Malaria research, at the African Arab Summit in November 2016 in Malabo. 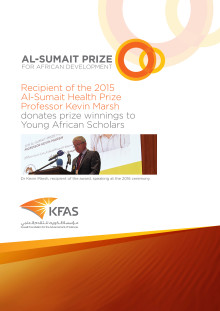