Kuwait City, November 1, 2018 – Kuwait today invited nominations for Al-Sumait Prize for Food Security in Africa, the fith in the series of its annual prizes to be awarded for significant advances in the areas of food security, health and education in Africa. Open to individuals or institutions, the closing date for entries for the one million dollar Al-Sumait Prize for Food Security is April 30, 2019.

The prize is to be awarded to individuals or institutions who through their research projects or initiatives have made signiﬁcant advancement within one or more of the following areas of Food Security on the African Continent:

Formally launched at a meeting of its Board of Trustees on December 7, 2015, in Kuwait, the Al-Sumait prize was first announced by the Amir of the State of Kuwait, H.H. Sheikh Sabah Al-Ahmad Al-Jaber Al-Sabah in November 2013 at the 3rd Arab African Summit.

The avowed aim of Al-Sumait Prize, which celebrates the life of the late Dr. Abdulrahman Al-Sumait, a Kuwaiti physician who devoted his life towards helping the poor in Africa, is to contribute significantly to solve major development challenges facing African nations.

The Al-Sumait Board of Trustees comprises prominent international personalities in the field of development in Africa and world-renowned philanthropists. Chaired by H.E. Sheikh Sabah Khaled Al-Hamad Al-Sabah, First Deputy Prime Minister and Minister of Foreign Affairs of the State of Kuwait, it includes amongst its membership Mr. Bill Gates, Co-Chair of the Bill & Melinda Gates Foundation, Mr. Makhtar Diop Vice World Bank Vice President for Africa and Dr. Kwaku Aning, Former Deputy Director General and Head of the Department of Technical Cooperation, International Atomic Energy Agency Application forms for the 2016 Al-Sumait Food Security Prize must be received no later than May 31, 2016.

The application forms are available at http://www.alsumaitprize.org/nominations/ Applications will close on 30th April 2019

For more information please visit www.alsumaitprize.org or please contact Prizes Office at Kuwait Foundation for the Advancement of Sciences (KFAS) 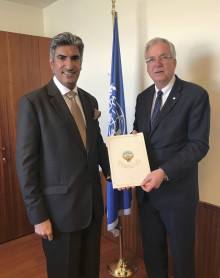